A selection of afrocentric films at this years BFI Flare Film Festival which opens on Thursday. Here are our selections for the festival.

Including Kenyan film, ‘Stories of Our Lives‘ which gets its UK Premiere at the festival but sadly is already sold out.

Mo’Nique returns to the big screen in her first film since winning an Oscar for ‘Precious‘ in ‘Blackbird‘ a story based on Larry Duplechan’s Novel of the same title, with the films screeplay written by Brit Rikki Beadle-Blair.

The Starlite, one of New York’s pre-Stonewall gay bars – a black-owned and operated influential dance club, is celebrated in, ‘We Came To Sweat‘. Some of the disco sound originated at the bar, which is now under the threat of redevelopment.

Plus there’s another chance to see French film, ‘Girlhood‘ and the hottest black film in years, ‘Dear White People‘ as with its London Film Festival outing last year the tickets sold out within an hour.

The festival closes with the documentary, ‘Out To Win‘, looking at the experience of LGBT sportspeople working in professional sport, with contributions from Brit John Amaechi, and remembering Justin Fashanu.

A gay boy in a deeply conservative Southern US town deals with the traumas of religious prejudice and coming out. 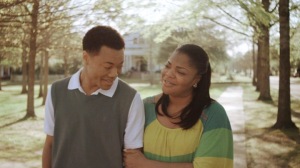 “Based on a 1986 Larry Duplechan novel, transposed to a Mississippi small town. Randy, a young black man, is wrestling unsuccessfully with his burgeoning sexuality. A member of his church choir, he has a tight cohort of school friends who seem more aware than he is of his sexuality. Meanwhile, at home Randy has to contend with his deeply religious mother (actress Mo’Nique from Precious), grief-stricken since his sister was mysteriously abducted. An unexpected encounter with a young actor and filmmaker changes things for Randy, but nothing runs that smoothly in this ripely melodramatic, emotionally engaging coming-of-age story, replete with plenty of sharp one-liners.” BFI

Céline Sciamma’s triumphant film explores of a young girl’s search for identity in the underprivileged suburbs of Paris.

“Céline Sciamma (Waterlilies and Tomboy) returns with this glorious coming of age drama about a quartet of young black girls growing up in the working class outskirts of Paris. Marieme is the eldest daughter of a single mother who works nights, leaving her with full responsibility for her younger sisters and an older brother so authoritarian that his behaviour borders on the abusive. At first a lonely, solitary figure among the young girls on her estate, Marieme is soon adopted by a sassy group, and the quartet find strength and power together in a community where rough boys dominate. Less overtly ‘L, B, or T’ than her previous work, Sciamma’s Girlhood is a nuanced examination of female friendship, gender dynamics and identity. Rihanna’s ‘Diamonds’ provides the backdrop to one of the year’s most electrifying, joyful scenes: ‘eye to eye, so alive, we’re like diamonds in the sky…’.” BFI

The diversification of an all-black residence hall forces a group of African-American university students to take a stand.

“Sam White is frustrated. Everywhere she looks, she finds racial inequality and coded aggression at her elite university. Her radio show is rubbing people up the wrong way and her ex-boyfriend, the tormented son of the school’s dean, is her opponent in a student election campaign she thinks she will never win. When she does, Sam is forced to face the true complexity of the racial politics she espouses; a complexity that Lionel Higgins, a gay writer casually ridiculed by the black student union Sam runs, is already facing.” BFI

We Came to Sweat

Over 50 years of gay, black American heritage is at stake when this pre-Stonewall Brooklyn bar is threatened by redevelopment.

“When a Brooklyn landmark, the black-owned and operated Starlite, is threatened with eviction by new landlords, its 50-year history as a pre-Stonewall gay bar and dance club is in peril. This film is a history of the club, its patrons and its staff, many of whom are also deserving of national treasure status. It’s not just in London that gentrification and rising property prices tempt landlords to sell to developers in the hope of making a fast buck. The community rallies around in protest, but is it enough? The history of the Starlite and its importance to the black gay community as a privileged space is underlined by the rich testimony from elders and family members for whom the venue is simply a part of their life. With a rich soundtrack of great music, reflecting the club’s influence on the creation of disco, the film is a warning to anyone who thinks their favourite gay bar is a permanent fixture.” BFI

Stories of Our Lives

A visually stunning and tenderly wrought collection of stories about LGBTI lives in Kenya.

“Two young women are in trouble for their ‘peculiar’ relationship; a farm hand is tormented when his crush begins courting a woman; a young DVD seller is intoxicated by the smoke and sounds of a clandestine gay bar. These are among the tales featured in this beautifully rendered collection of narratives from LGBTI Kenyans. Stories of Our Lives started out as an archival project by the multi-disciplinary Nest Collective, and the testimonies given have been tenderly wrought into funny, endearing – and at times heartbreaking – sketches. The quality and imagination achieved transcends the predictable but nevertheless disappointing response from the Kenyan government; after its Toronto premiere Stories of Our Lives was banned in the country for promoting homosexuality. That many of the actors are not themselves LGBT but were willing to participate at great personal risk is testament to the socially incisive and life-affirming vision of the project.” BFI

Inspirational documentary charting the history of homosexuality in competitive sport, with interviewees including Martina Navratilova and Jason Collins.

“In the competitive world of professional sports, homosexuality continues to be a big issue. So big that it seems no-one wants to talk about it. With so many athletes afraid that coming out will mark the end of their careers, there is a dearth of proud LGBT sportspeople representing the community and empowering future generations. Thankfully, some brave individuals have spoken out about their sexuality and paved the way for change. Told through the words of these pioneers, Malcolm Ingram’s inspirational documentary charts the history of homosexuality in sport, highlighting the triumphs, and indeed the tragedies, of those fearless forerunners, and profiling the victories of present day stars” BFI 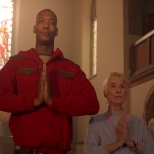 The View from Here | Mar 20, 2015 4:00 PM | Mar 21, 2015 11:50 AM
Whether you’re in your teens or well into adulthood, coming out can be one of the most terrifying (and perhaps most thrilling) things you’ll ever have to do, as demonstrated in this poignant collection of short films.

The Return  La Retour – A teenage boy must make sense of the world around him after he learns the truth about his older brother.

Pleasures and Perils of Desire | Mar 23, 2015 4:00 PM
A rich haul of shorts about yearning for, finding, and remembering encounters of a sexual nature.

Caged  Uitgesproken – A group of friends hanging out at a sports ground discover one of their number is gay, but it seems he might not be the only one.

Black Is Blue – A young homeless transman works as a security guard and is called to shut down a party his ex was rather enjoying.

Beyond Plain Sight – A seemingly charming young man hides a very dark and disturbing secret in his South London flat.

Fragile Things | Mar 29, 2015 12:45 PM
A collection of UK short films – From first encounters to break-ups, via autograph hunters, hand-jobs and a vision of Christ, this selection of homegrown narrative shorts explores infatuation and desire.

When Fragile Things Break – An explosive drama about dreams and hearts breaking.

Mingmong – Annalise and Jude collect autographs together but Annalise’s mind is on other things.

Followers – Lynn has a vision of the face of Christ on a pair of swimming trunks.